First up is a genuine British SF legend and a thoroughly nice bloke to boot, NSFWG founder and chairman, Ian Watson.  The man has a list of credits longer than your arm, from ground-breaking sci-fi novels to working with Stanley Kubrick and all points in between. 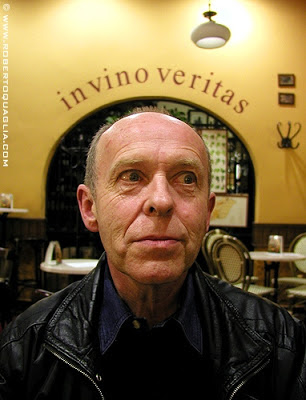 Above all, reading, and deciding that some books were short enough that I might actually manage to write one, in order to pin down my perceptions of the world, a bit like butterflies.  Of course I couldn´t realise, way back then, that I didn't really yet have enough experience of the world, although that didn´t stop some people I read.

My SF novel, The Embedding, in 1973.  I was rather surprised when it was reviewed very enthusiastically and sold translations and won a couple of awards, because I didn't think the book was all that unusual, but apparently it was, being the first SF novel featuring modern psycholinguistics.

Though I've been selling stories since about 1969, it's never too late to learn, and to spot errors that the author is blind to.  In recent years the group helped improve maybe ten of my short stories before sending them off to market.  Apart from that, there´s friendship, leading -- for instance, to me collaborating with Andy West on a big and rather excellent (in my opinion) novel, The Waters of Destiny, which simply couldn´t have been written without Andy.  Not to mention that Ian Whates, of our group, published three books with my name on them through his outstanding NewCon Press, which (probably) wouldn´t have come into being if the group hadn´t existed; not to further mention that Ian Whates and I collaborated on two big anthologies published by Mammoth which are doing rather well commercially.  I think the important thing about the group is that we aim to produce work that deserves to be, and does get, published, by the method of close analysis of work distributed in advance, two stories (or excerpts) per month.

I think the last story which the group workshopped was my "Blair's War" which has just appeared in the July 2013 issue of Asimov´s Science Fiction magazine.

Ian on the Net

www.ianwatson.info leads to the Gollancz Gateway (www.sfgateway.com) which restored  all of my backlist (apart from my four Warhammer 40K novels) as ebooks.

Also, beautiful www.watersofdestiny.com sells ebook editions of The Waters of Destiny by me and Andy.
Posted by Mark West at 09:30