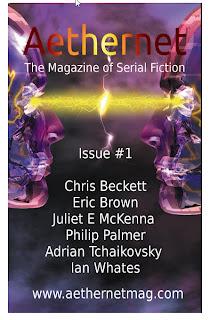 He has a 22,500 word novella "The Smallest of Things" which has been serialised in four parts in the 'home of serial fiction' Aethernet, with the final chapter appearing in the July issue.  All details are available on the magazines website - follow this link.

His story, "Eros for Annabelle", appeared in the science journal Nature in January.

He currently has five stories currently 'sold' awaiting publication, one of which will appear in the next BFS Journal edited by Sarah Newton, one in a future edition of PS Publishing's Postscripts, and the other three in anthologies from various publishers.

On the NewCon Press front, it's perhaps worth giving The Peacock Cloak a plug.  At one point a month or so ago the collection, from this year's Arthur C Clarke Award winner Chris Beckett, occupied the #1 spot in Amazon UK's 'science fiction short story category for both physical books and kindle simultaneously.  It has also just been selected by the Financial Times as one of their recommended reads of the summer.
Posted by Mark West at 09:30