An essential part of being a good writer is being a good reader and the earlier that love of books can be instilled, the better.  NSFWG member Mark West has been blogging about his earliest inspirations (comics, books, etc) and the following is his latest website entry.

Reading has played an important part in my life for as long as I can remember and when I was at Junior school, we had a thing called The Bookworm Club.  It must have been a nationwide organisation (I vaguely remember a catalogue, though I can’t find any info about it on the Net) but what happened at Rothwell Juniors was that a stall was set up in the hall and you went in and bought any books that took your fancy (there was also something with collecting vouchers and saving them on a card).  I enjoyed it because it was aimed towards me (bookshops in those days weren’t, particularly, kid friendly), I could pick what I wanted and they had some great titles to choose from. 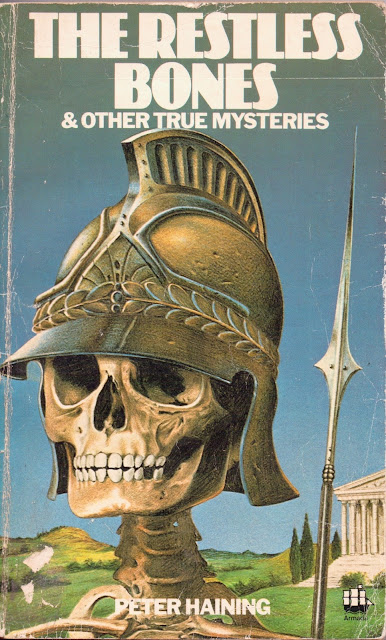 “The Restless Bones & Other True Mysteries”, edited by Peter Haining, is a slim Armada paperback that has no copyright/publishers information in it at all, though I believe it was published in 1978.  The cover was painted by Alun Hood, whilst the interior illustrations were the work of Ellis Nadler. 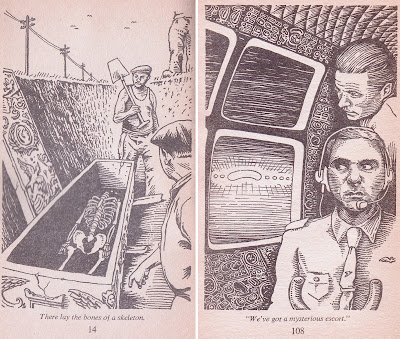 Peter Haining (1940-2007) was a journalist, author and anthologist from Suffolk, who was Editorial Director at New English Library before becoming a full-time writer in the early 70s.  He edited a large number of anthologies, predominantly of horror and fantasy short stories and wrote non-fiction books on a variety of topics, sometimes using the pen names ‘Ric Alexander’ and ‘Richard Peyton’ for crime anthologies.  He won the British Fantasy Society Karl Edward Wagner Award in 2001. 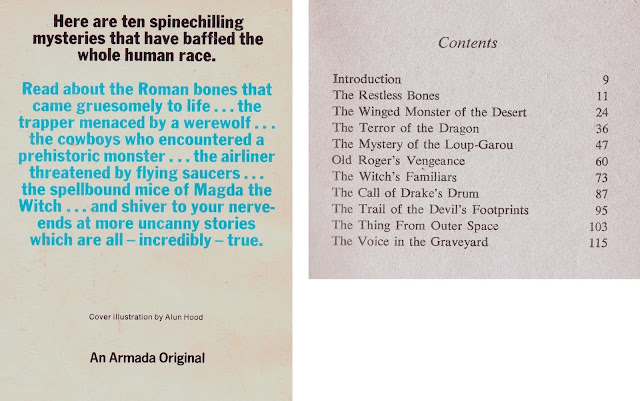 “The Restless Bones” contains ten stories:
The Restless Bones, The Winged Monster of the Desert, The Terror Of The Dragon, The Mystery of the Loup-Garou, Old Roger’s Vengeance, The Witch’s Familiars, The Call of Darke’s Drum, The Trail of the Devil’s Fooprints, The Thing From Outer Space and The Voice In The Graveyward.  “I have drawn on the large file of material I have collected over the years about events and experiences which are fantastic - but factual” is Haining’s comment on their origins, as he writes in his introduction.

The killer story for me was “The Voice in the Graveyard”, wherein teenaged Richard, in 1964 Wisconsin, accepts a challenge to spend the night in a graveyard, all on his own.  As I write this, on a sunny afternoon in July 2013, far removed from the nine-year-old me reading it over the 1978 summer holidays, I can still remember the frisson of fear that ran through me when Richard hears a whispering voice plead, “…help us…” 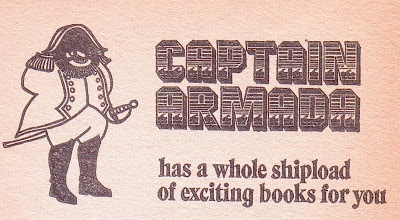 Well presented, with a good range of mysteries, this kept my attention well and steered me further into the path of horror and the supernatural (the devil's footprints being backed up by Arthur C. Clarke, of course).

I'm also proud to say that this 35 year old book still stands on my bookshelf - it looks a little beaten up around the edges, but it's holdings its own.

originally published at Strange Tales, reprinted with permission
Posted by Mark West at 10:08