Conjure, a novel by Mark West

NSFWG member Mark West's 2009 short novel "Conjure" is being re-published by Greyhart Press, in both print and digital editions.  It was originally published, as a limited edition, by Rainfall Books and later as an ebook - the latter a venture West now disowns and regained the rights from as soon as possible.

West has also designed a new cover for the book. 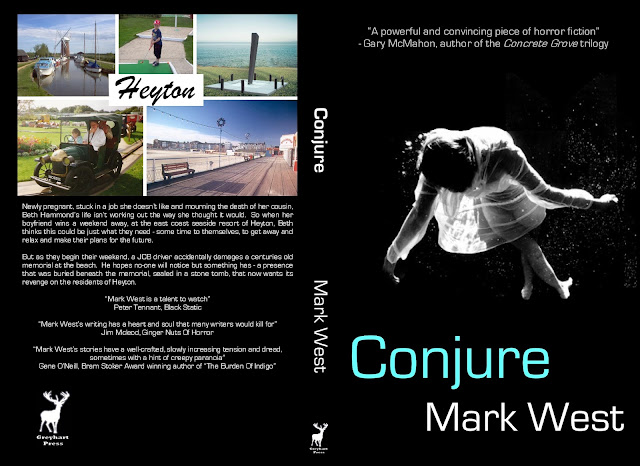 Newly pregnant, stuck in a job she doesn’t like and mourning the death of her cousin, Beth Hammond’s life isn’t working out the way she thought it would.  So when her boyfriend wins a weekend away, at the east coast seaside resort of Heyton, Beth thinks this could be just what they need - some time to themselves, to get away and relax and make their plans for the future.

But as they begin their weekend, a JCB driver accidentally damages a centuries old memorial at the beach.  He hopes no-one will notice but something has - a presence that was buried beneath the memorial, sealed in a stone tomb, that now wants its revenge on the residents of Heyton.

“Mark West’s writing has a heart and soul that many writers would kill for”
Jim Mcleod, Ginger Nuts Of Horror

“Mark West’s stories have a well-crafted, slowly increasing tension and dread, sometimes with a hint of creepy paranoia”
Gene O’Neill, Bram Stoker Award winning author of “The Burden Of Indigo”
Posted by Mark West at 09:00