Available in paperback from amazon.com  |amazon.co.uk
and in Kindle edition amazon.com |amazon.co.uk
ePUB edition to follow in late summer 2013.
Life in the quaint English hampton of Badger’s Waddle is never quite the same as elsewhere in the country… or any other country for that matter.
The first sign of impending chaos was when giant rabbits breached the defenses all along the indeterminate length of the vegetable garden of Little Twee cottage.
To patch up the defenses took the combined efforts of the resident gastrognome and a Crippin & Hare Indifference Engine operated by Tavarius Truckle, the man with the highest ever score in an apathitude test. But when tourists start exploding at the village fete, bank deposits build up a critical pressure, and the church’s resident saint finds a loophole in his contract of supra-ecclesiastical employment, the whole hampton must unite to restore some semblance of normality (except for Tavarius Truckle, who’s far too apathetic to care). Only Goode Nurture, the nice old lady in the tall, pointy black hat, has been preparing for this moment, shaving her gibbons in readiness for the looming crisis.
This book will be lapped up by followers of Terry Pratchett’s Discworld series, and fans of Tom Holt and Douglas Adams. But be warned… underneath the polite gentility of English good manners, this book is very, very, rude!
“A helter-skelter ride through life in rural England as seen through the lens of Alice in Wonderland.  Suffused with surreal charm and populated by perceptively-drawn larger than life characters.”  — Ian Whates, author of ‘City of Dreams & Nightmare’.
A short novel — 55,000 words
Artwork by Dean Harkness (click on the picture below to see his hand-painted artwork in super-sharp detail. All the characters and scenes come from the story.) 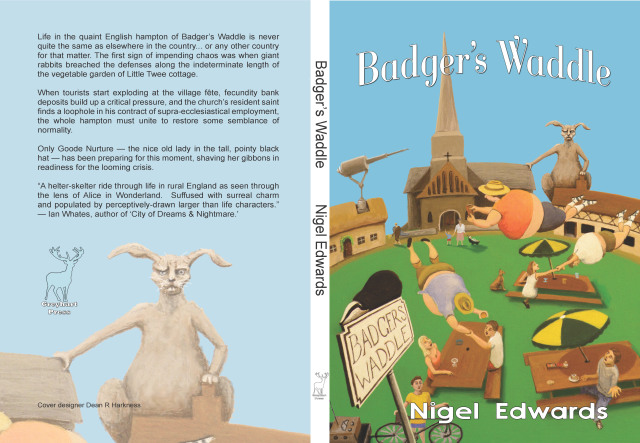