The Book That Made Me - Paul Melhuish

In the first part of an ongoing series, NSFWG member Paul Meluish discusses "the book that made me"


* * * * *
The year is 1990. The place; somewhere is Switzerland. The weather; sunny. I’m supposed to be hitch-hiking. I’m sitting on the crash barrier on some rural road and there’s a blind curve to my left. Hardly any cars are coming but I don’t mind because I’m sitting there, rucksack at my feet, reading Clive Barker’s Weaveworld, part of me hoping no cars come for a while, the other part of me knowing I’ve got to get to Lausanne at some point today. When a car does come I can hear the engine before the vehicle rounds the blind curve so I snap the book shut and slip it into my denim jacket pocket, stick out my cardboard sign for Lausanne, smile in that I’m-not-a-serial-killer reassuring grin I’ve perfected for hitching, and the car drives straight by. Good, I think, I can finish the next chapter.

Obviously someone picked me up because I’m writing this in my kitchen and not on that same blind bend where I’ve been stuck for the last 24 years.

For this piece I was going to cite The Lord of the Rings as the book that made me but I chose not to for two reasons.

1. Everybody else has already chosen this book as their special baby.
2. Although LOTR remains one of my favourite books it didn’t inform my writing today. I don’t write fantasy as such. I write horror, Sci-fi or a combination of both with fantasy elements. Weaveworld had a bigger influence on my writing than I’d care to admit.

I’d spent my adolescence in rural Oxfordshire reading James Herbert books, going for solitary walks an bemoaning the fact that I didn’t have a girlfriend. I loved all that New English Library horror but for me the writers never went far enough into the fantasy elements. They would mention hell but I wanted to see it, suicide trees and all.

Time passed. I left school with no qualifications, worked as a painter and decorator and quickly decided I didn’t want to work my life away priming skirting boards (they wouldn’t let me near any proper paint anyway) so I made plans to travel. At eighteen I inter-railed around Europe on my own and flipping loved it. At nineteen I left home and decided to hitch-hike through Europe and work in Spain. I ended up working in Switzerland. Well, both countries began with S. 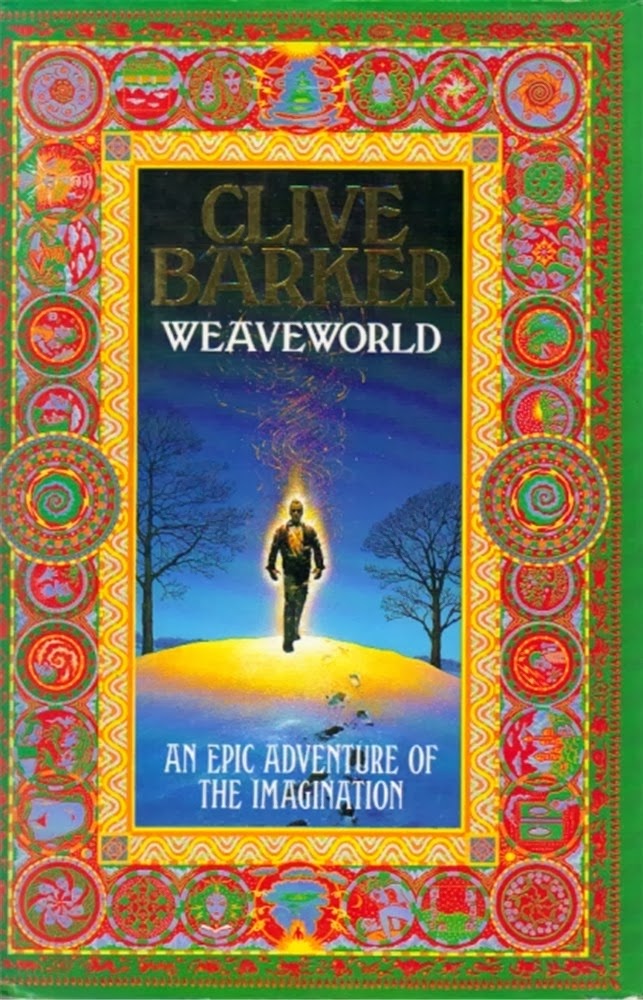 Before I left, I bought 4 books and put them in the side pockets of my rucksack. One book was On the Road by Jack Kerouac (which I thought was crap. Well, I was nineteen) another was Magician by Raymond E. Feist (which I still think is crap but as he outsells me by millions I’m probably the only one to think this) I can’t remember the third one but the forth book I took was Weaveworld.

I began reading it in the youth hostel in Dover, I didn’t read it on the ferry crossing the channel because I got talking to a pretty Cambridge graduate called Emma and we drank halves of lager for the short crossing, but I did read it in Paris, Spain, the South of France and finished it in Switzerland.

The story centres around a guy called Cal Mooney who finds a carpet, Weaveworld, and becomes embroiled in the battle for who should own and use this carpet. The carpet, when unravelled, reveals a magical world which amalgamates with the real world. There is a creature called the Madeleine who rapes men and reproduces with them, a salesman who possesses a jacket that can produce any gift his ‘customers’ desire. The protagonists find Oriel, the angel who guards the gates of Eden and the goodies and baddies travel to the centre of the carpet to find the Fugue, the power centre for the carpet.

Weaveworld is a massive, mind twisting adventure and a real page turner. What made the pages come alive for me was the fact that I was having my own adventure as I reading the book.

I’d hitch-hiked through France and got from Paris to Bordeaux in one lift. I’d hitched from Bordeaux to Barcelona with an American who had come to Europe to escape the law for some unspecified crime. Experiencing something of a crisis in confidence I’d decided to not bother looking for work in Spain and just travel instead so headed back into France. One time I read Weaveworld sitting under a bridge with bullfrogs burping as I’d have to sleep rough that night because I was in the middle of nowhere and I wasn’t going to hitch-hike at night. I travelled with an Irish guy called Colm and we spent the Easter weekend in the Pyrenees. I was reading the book in exceptional scenery. Colm and I looked for work in the South of France but he eventually got me a job working on a farm in Switzerland, lying to the farmer and his family, telling them that I was a student (a lie I had to keep up for my whole four month stay there).

I finished Weaveworld in a Youth Hostel in Switzerland. It was late and I was the only one in the lounge of this funny little wooden cabin. I stayed up until midnight reading. It would be my birthday the next day and I would be 20. Not a bad way to end your teenage years.

I really missed that book when I’d finished. I wanted Cal, the Weaveworld and all the characters to carry on. I also did something I’d never done before. Usually, I was precious about my book collection and would keep books. I left Weaveworld on the book shelf of that youth hostel. It would be nice to think it stayed there or, even better, got picked up by someone else travelling so they could revel in the books magic when travelling.

I read Weaveworld again in 1992 but it didn’t have the same magic. I was working as a kitchen porter then, living a mundane life and knowing the story already took the edge away.

Not only did the book open my mind to literary possibilities but the experience of travelling around Europe changed my perspective forever. I learned that life didn’t have to be humdrum and boring. I learned that you could just set out with just a rough plan and something would come up. The experience improved my problem solving skills and I learned to overcome fears that had once mentally crippled me. This was my rite of passage;  having to survive sleeping rough and having no money, working in a strange country and getting past the language barriers. If I could survive that I could survive most things.

There are other books I’ve read when life was good that I remember with great affection. I read Michael Moorcock’s Hawkmoon series last year. I was unmarried when I started that book and married when I finished it. Perdido Street Station I remember reading when I was on placement in Slough and things were going well. I also have fond memories or reading Imajica by Barker in 1995 at my first year of university in Northampton but Weaveworld always reminds me of my time thumbing it across Europe.
Posted by Mark West at 09:00

Email ThisBlogThis!Share to TwitterShare to FacebookShare to Pinterest
Labels: article, NSFWG, paul melhuish, the book that made me