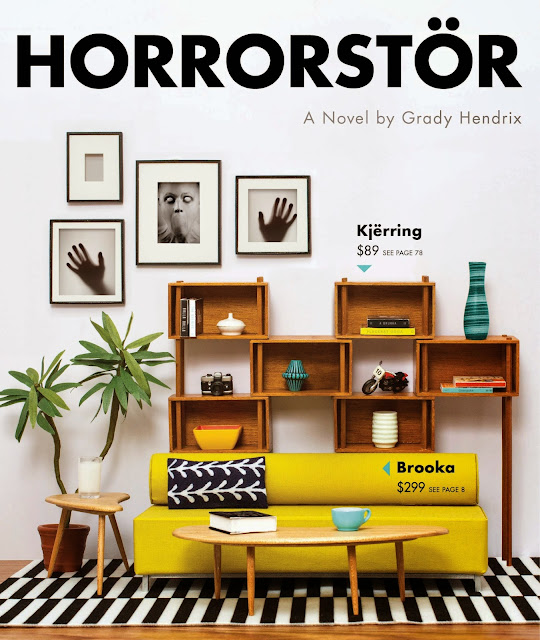 Something strange is happening at the Orsk furniture superstore in Cleveland, Ohio. Every morning, employees arrive to find broken Kjerring bookshelves, shattered Glans water goblets, and smashed Liripip wardrobes. Sales are down, security cameras reveal nothing, and store managers are panicking.

To unravel the mystery, three employees volunteer to work a nine-hour dusk-till-dawn shift. In the dead of the night, they’ll patrol the empty showroom floor, investigate strange sights and sounds, and encounter horrors that defy the imagination.

It was dawn, and the zombies were stumbling through the parking lot, streaming toward the massive beige box at the far end.  And so opens “Horrorstör”, setting the scene and tone for the rest of this clever little novel.  Focussing on the events of one particular store - the Cuyahoga, Cleveland branch - of the “IKEA rip-off” Orsk chain (complete with its own philosophy, mission statements and banal phrasings), over the course of a day and night, this centres around Amy, a college drop-out who is fed up with the downward spiral her life has taken and desperate for something else.  With all of the problems the store is having, a consultancy team is due from Head Office the next day so Amy’s manager (and bête noire) Basil recruits her, the always-nice-but-has-no-family-or-friends Ruth Anne and himself to spend the night on the premises and make sure nothing happens between closing and opening.  When Amy’s colleagues Trinity and Matt break in, to shoot a showreel of their show “Ghost Bomb” they want to sell to Bravo (“would everyone stop talking about A&E?”) and a strange homeless man called Carl wanders in, things take a turn for the worse.  It appears, as Trinity is eager to tell them, that the store was built over the remains of a prison from the nineteenth century whose warden, Josiah Worth, had odd ideas on how to get his inmates to repent.

Having said all that, this isn’t a grim novel and the first half is a smart satire on both the culture of a big corporation that believes its own hype (I wonder if IKEA had words, at some point) and also the way that we, the consumer, are pushed and prodded and psychologically conditioned on what to buy.  This strand of humour runs through the whole book and there were a couple of pieces that made me laugh out loud.

The characterisation is brisk and efficient, telling us just enough about each person to make us understand their actions and we quickly come to care about them, from the desperately lonely Ruth Anne, the beaten-down Amy and the strictly efficient Basil .  Almost a character in itself is the building, a proper haunted house that is part bland superstore, part psycho-fairground-funhouse and part grim Panopticon (the beehive of the graffiti Amy finds at the start of the story).  I’d never really thought about it but Hendrix does a great job of making the huge warehouse frightening, its claustrophobia coming from its size in the dark - how do you find your way? - plus the fact that it’s in the middle of nowhere (the police despatcher Amy calls when they discover Carl can’t find it).  In fact, Hendrix works with the tropes of the ghost story well, creating some moments that are genuinely creepy as he ramps up the tension.  The horror, too, comes thick and fast, dealt with in a brutally blunt way so that you read a quick line - a character loses a nail - and it’s not until you’re two or three lines on that the full revulsion hits you.

Helping everything along is the design (by Andie Reid) and illustrations (by Michael Rogalski), which is very good indeed - the book looks just like a catalogue from a Swedish home furnishing giant, complete with a store map, product details and a home delivery order form.  Each chapter is headed by a particular products design and description (some ruder sounding than others, my favourite was the Arsle chair) and these get grimmer as the story progresses, as if David Cronenberg was thinking of opening up his own furniture shop.

This is a well written, runs at a cracking pace and is witty, self-assured and clever without being obnoxious.  It made me laugh, it creeped me out and I thoroughly enjoyed it.  Very highly recommended.


this review originally appeared on Mark's blog here
Posted by Mark West at 09:00 No comments: