NSFWG Member Andy West has a new collection out

Engines of Life: Tales of Evolution
by Andy West

Coming soon in other eBook formats

A collection of novelettes and a novella by Andy West with the connecting theme that underlies almost all of his fiction: evolution. 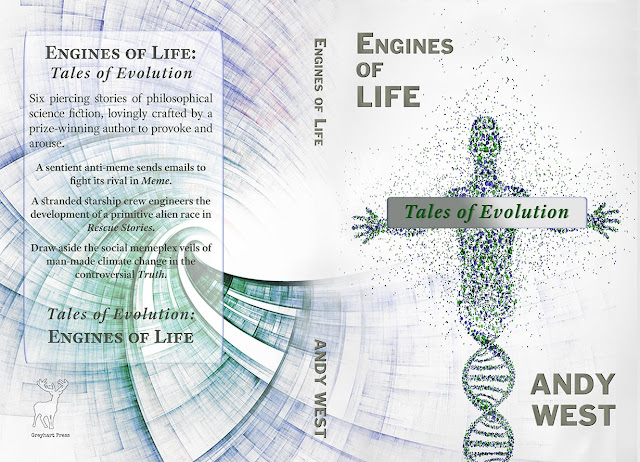 Tales of Evolution
Six piercing novellas and novelettes of philosophical science fiction, lovingly crafted by a prize-winning author to provoke and arouse.
A sentient anti-meme sends emails to fight its rival in Meme.
A stranded starship crew engineers the development of a primitive alien race in Rescue Stories.
Draw aside the social memeplex veils of man-made climate change in the controversialTruth.
Using hypnosis Professor Merrill probes the ‘proto-Sapiens’ language buried in us all. Yet mining the primitive words unlooses savagery, which kidnaps Merrill into grisly Ritual inMano Mart.
Awaking with amnesia in a sealed, spooky museum, Guy Green seeks identity and escape. He finds a curious alien, a disgusting Curator, and an appalling future.
Ofermynd meant only to examine the primitive creatures competing fiercely upon 7thcentury Earth, not reveal himself. Hearing God’s word, Emperor Heraclius declares Holy War in Empirical Purple.
“From the lazy notions of trans-humanists, the confirmation bias and strangling of free debate that corrupts climate change science, to the one, deep, language that unites us all, West takes unerring aim at his targets and channels his passion to deliver winning science fiction every time.”
Outstretched figure: image (c) Lonely – Shutterstock.com; abstract swirl (c) Emelyanov – Shutterstock.com