Eighth up is Andy West. 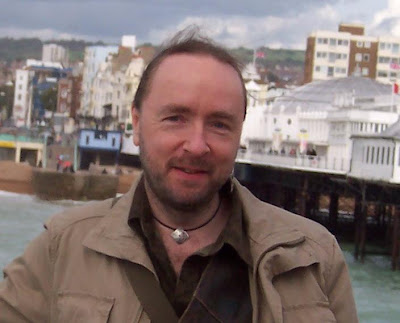 Ultimately, I think it was the desire to say some things about the world that no-one else appeared to have said, at least as stories. Typically things about how life and society works, which might more usually be found in arcane biology or social science text-books. I am passionate about the science of evolution, and realised that its revelations could form the raw frameworks for stories which no-one else had told, and that, being underpinned by theory(ish), would have a persuasive ring of realism beneath the fiction. Somewhere along the line too I fell in love with myths (fictional and actual), and desired to create my own. I ‘just’ had to learn how to actually write enjoyable fiction, which took a lot longer than I thought (being young and over-confident). But I think I may be starting to get there now J. In short, I wanted to voice my own interests and observations to the world, and I figured the medium of story would be both the best and most rewarding way to go.

Well I guess there are different success markers really, ones that feel different. The webzine Bewildering Stories published a work in 2006, and I was extremely pleased that I was ‘out there’ at last. Then the following year Ian Whates of the back-then nascent Newcon Press was kind enough to publish me in disLocations, an anthology packed with well-known writers and... me! That was hugely satisfying in a different way and I am eternally grateful to Ian for his faith in my writing. Then getting my tale Rescue Stories in a runner-up slot in the BSFA’s 50th anniversary short-story competition, with publication in a special edition of Focus (2009), was different  again. It definitely feels like success when Stephen Baxter hands you a prize J.

The group is absolutely invaluable. For one thing, I’m not actually very widely read compared to most of the group members, and their immense knowledge of other works (as applied both to critiques of my own work or just in general exchange) is incredibly useful. As of course are all the different perspectives that each member supplies, each picking up errors and better approaches that I haven’t spotted. My own focus (as various of my stories are about narrative itself) is the underlying mechanics of how story works, and this is my angle that I attempt to return to the pool of ‘group skills’, if it can be so called. Then there’s the relationships, which have become very valuable over the years both in a direct writing context and in firm friendships too. I was very honoured to collaborate with Ian Watson on our techno-thriller trilogy The Waters of Destiny, not to mention enjoying getting to know him much better during the delightful process of working closely together. His (seemingly to me) instantaneous creation of colourful characters, cunning subplots and grand vistas was a great thing to behold, inspiring me to stretch with my own input. With Ian Whates I have shared culinary delights, but none quite so tasty to me as when his NewCon Press, which has gained such a fine reputation in the industry over the last few years, published my first novel The Outcast and the Little One.  And latterly I was hugely appreciative of Tim Taylor’s Greyhart Press publishing my first collection Engines of Life, plus some while back Tim also granted me an electronic home for the above mentioned Rescue Stories after its paper run in Focus. There’s a big positive feedback loop of confidence and improving skills and yes, publication too, within the group, without which I’d probably still be writing stuff that never saw the outside of my home!

Well the latest publication (only last July) was Engines of Life from Greyhart Press per above, comprising six novellas and novelettes of which one, The Curator, is unique to the collection. The Curator was the winning story in the University of Central Lancaster’s (UCLan) Science Fiction competition a year or so back. However they were then unable to publish because legal difficulties arose, apparently connected to the University’s charter. This same  collection also contains the novella Truth, which although it first saw the light of day back at the turn of this year, is the in fact most recent story I’ve written. Since then I’ve been working on a huge non-fiction piece that has absorbed all my time and effort (in-between the day job!). I hope, finally finally, to have this piece out of the way very soon now and return to fiction.

Given the length unusual length of time I’ve been away from the fiction trail (due to the above mentioned project), I’m actually in the position of having various concepts on the queue and have no idea which one to go for! Watch this space J.

Andy on the Net


Also, beautiful www.watersofdestiny.com sells ebook editions of The Waters of Destiny by me and Ian Watson.
Posted by Mark West at 09:00