Third up is Steve Longworth. 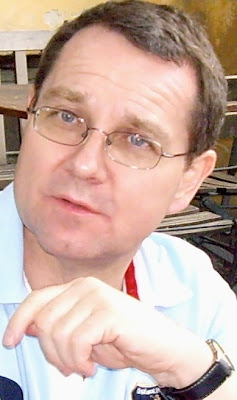 I’ve been reading Ian Watson’s novels and short stories since I first came across ‘The Jonah Kit’ while browsing the SF section in WH Smith in Bolton in 1975 aged 17. Until then I had been reading mainly Isaac Asimov and EE ‘Doc’ Smith with a smattering of Harry Harrison and Arthur C. Clarke. My eye was caught by the ‘Winner of the British Science Fiction Award’ flash on the cover and I was intrigued by the blurb on the back so I bought Ian’s book and this changed my reading habits forever. I was blown away by his uncompromising intellectual style and content and have been hoovering up his novels and short story collections ever since.

We now move on to 2007 when I was on a flight back to the UK and reading Ian’s short story collection ‘The Great Escape’. As we came in to land I was half way through a story called ‘Tulips From Amsterdam’ a tale about coincidence. More specifically the story concerns a famous painting by the Dutch Master Rembrant van Rijn titled ‘The Anatomy Lesson Of Dr Nicolaes Tulp’ which depicts the dissection of the corpse of the recently executed armed robber Aris Kindt (the painting contains a famous anatomical mistake which should be obvious to anybody who shares my day job). Anyway, I bookmarked the page and on arriving back home had to choose between finishing off the story and wading through the pile of mail on the doormat. I reluctantly decided on the latter, opened the latest copy of the British Medical Journal and found myself staring at a picture of ‘The Anatomy Lesson Of Dr Nicolaes Tulp’. The painting was due to come to London on loan. What a coincidence! And doubly spooky that the story itself was all about coincidence! Fate? Karma? A message from the Universe? Too much booze on the flight home? Whatever, on a whim I googled Mr Watson and discovered that not only did he have a website but that this had a ‘Contact Ian Watson’ tab. Which I duly tabbed, and recounted the preceding tale. Expecting little more than a ‘Thanks for that and keep buying the books’ I was pleasantly surprised to receive a long, detailed and thoughtful reply, which leads on to the next question…

I corresponded by e-mail with Mr. Watson and we ranged over various topics. I mentioned that I had what I thought was a great idea for a story but that I was never going to get around to writing it, so did he want it? ‘Go ahead and write it!’ came back the reply and what’s more ‘write it as a flash story and send it in to Henry Gee at ‘Nature Futures’ and tell him I told you to send it’. So I did. And Henry very nicely rejected it. But undeterred I picked up on a throwaway line Ian wrote about homeopathy in one of his e-mails. ‘Ah,’ I said, ‘I have a theory about that’. ‘Well turn it into a story,’ replied Mr. W and so I did. Ian very kindly pointed out where the story could be improved so I re-wrote it and sent it to Henry Gee who accepted it. And paid me for it! To be honest, I’d have paid him to have it published (I hope he’s not reading this). The story is called ‘Succussion’ and can be seen on the ‘Nature Futures’ website. My story ‘Memory Sticks’ made the same location in 2010.

The group is the one thing I have that is completely outside medicine and is my lifeline to the real world (which might seem paradoxical for a group that discusses SF and Fantasy). I really appreciate being an equal amongst a group of talented, supportive, funny, generous, thoughtful, honest and convivial writers who have the integrity to tell you as kindly as they possibly can how you might improve.

‘Extraordinary Rendition’ in the ‘Further Conflicts’ anthology by NewCon Press is the last piece I had published.

Various short stories. The first novel will have to wait for me to retire from the day job (4 years 9 months and counting).