In case you missed it, Anatomy of Death (in five sleazy pieces), the editorial debut of NSFWG member Mark West, has been published by Hersham Horror Books. 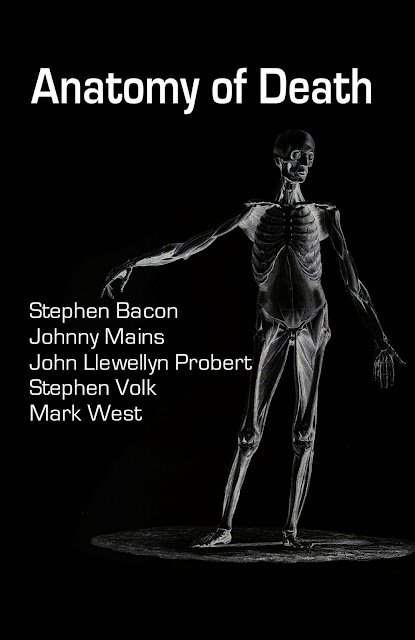 I was lucky enough to feature in their first PentAnth, Fogbound From Five and had great fun with that so when Pete May asked if I wanted to edit my own, I jumped at the chance.

Free to pick my own theme, I decided to go for one of the ‘phases’ that I have a particular fondness for (as a kid of the 70s and 80s), namely that explosion of ‘sleazy’ horror that ran from the early 1970s.  Think of the films of Hammer, Amicus and Pete Walker or the slim, gory and gruesome paperbacks from NEL, Corgi, Star, Hamlyn, Futura et al and you won’t go far wrong.  It was a time of  sex and violence, of pulpy horror and gratuitous nudity, of demons and monsters and no limit to what the writers would expect you to believe.

To fill out my collection, I decided to aim high first and contacted Stephen Volk.  Perhaps best known for Ghostwatch, Afterlife, The Awakening and Ken Russell’s Gothic, he’s a writer I’m in awe of and his story, an envelope-pusher if ever there was one, was ideal - grim, gruesome but also blackly comic.  A Pete Walker film made in type.

Johnny Mains, a true supporter of 70s horror, presented me with a blackly comic, rude and undeniably gruesome story that would have fitted the heyday of those garish paperbacks to a tee.

Stephen Bacon contributed a quieter tale that tells of the sins of the past coming back to haunt the present, the deliberate pace and atmosphere recalling something Hammer might have produced in the period.

John Llewellyn Probert came onboard with a wonderful Victorian drama, featuring a young lady in distress, something terrible from the Thames and a threat to London.  It cannot be read without picturing Peter Cushing as the lead character.

For my story, I decided to embrace the period.  I read a stash of 70s/80s horror paperbacks and had great fun with London during the 1976 heatwave and a glamour photographer who gets tangled up with a monstrous ‘beast’.  I’m proud to share space with these fine writers and their stories.

I produced the cover art for the first two PentAnths (co-designing the first with Neil Williams) and we went through many iterations on this project (my teaser, blogged about here, got a lot of good feedback though unfortunately we couldn’t track the rights through Robert Hale).  In the end, we decided on a simple graphic and I think it works well.

I've had great fun doing this.  It was a real pleasure dealing with writers I admired, I loved writing my story and I've had a great relationship with Peter Mark May during the process.  I’m not sure I’d like to edit again but it’s been an experience and I hope the finished product does what it’s supposed to do - thrill, sicken, terrify and entertain!

The book can be purchased, in print, from Amazon at this link and as ebook from this link

A Facebook page can be found (and liked) here 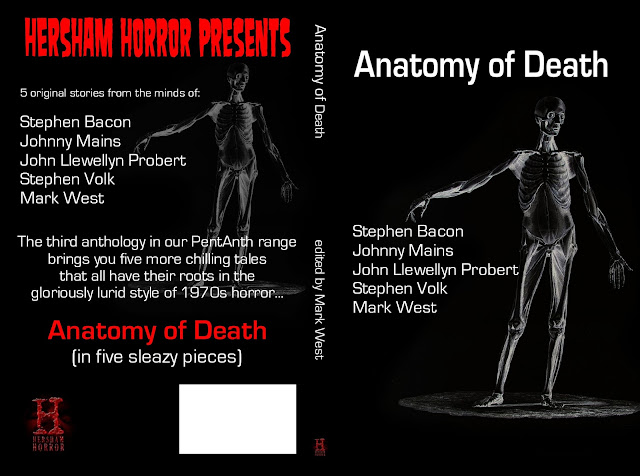