Fourth up is Ian Whates, co-chairman of the group. 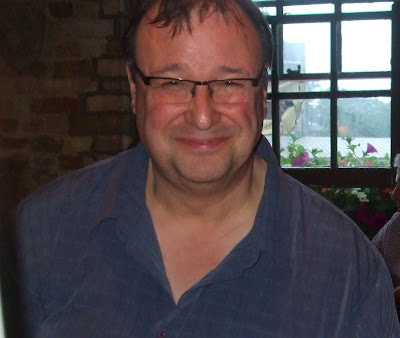 That’s easy (always a great way to start an interview!).  I read from a very early age and became enchanted and inspired by many of the fabulous stories and worlds that unfurled within the pages of those books.  I remember hearing a serialised reading on the radio (not a dramatic presentation, a simple reading) of John Wyndham’s The Chrysalids and being totally dazzled by it.  I lapped up the Norse and Greek legends, progressed through juvenile fantasy, discovered first Andre Norton and then Asimov and Moorcock… How could you not want to write when you’re exposed to marvels such as those?  I knew, even before I reached my teens, that I absolutely had to.

That depends on how you define ‘success’.  My first ever short story sale, to Dream Magazine at the end of 1986 (the story appeared in the March 1987 issue) was one instance.  I sold five or six stories around that time before my writing career went on hold for seventeen years.  My first sale on my return, to Afterburn SF in early 2006, would count as another, as would my first ‘professional’ sale, to the science journal Nature later that same year.  The first time I really believed I was getting somewhere, though, was when I sold my first novel.  I was in the extremely privileged position of selling two different novel series to two different publishers at roughly the same time, which led to the first volume in each coming out in the same month: March 2010.  This presaged a wonderful, crazy few years in which I was swapping constantly between writing within the space opera universe of the Noise books (Solaris) and the urban fantasy/steampunk setting of the City of 100 Rows novels (Angry Robot).

More than I could possibly express in the scope of this interview.  The first thing it did was put me in touch with a group of diverse people trying to do what I wanted to do.  Then it improved my writing dramatically – not just because of the comments made by others on my own work but also through the experience of critiquing the stories of fellow members, which began to teach me how to analyse my own work more subjectively and, ultimately, to edit.  In addition, without the group, there would have been no Newcon conventions, and so no NewCon Press.  I can’t imagine what my life would be like now without that particular enterprise.

I’ve recently completed two pieces: a fantasy short story called “Return to Arden Falls” (critiqued by the group last month) and a 22,500 word SF/urban fantasy cross-over novella called “The Smallest of Things, which has just been serialised in four parts in the wonderful Aethernet magazine.  Both feature recurring characters who have been the protagonists of previously published work and doubtless will be again.  The first is an unnamed cynical anti-hero with a past he tries not to dwell on, the second an altruistic reality–hopping fixer who can step between different versions of London.

My latest novel Pelquin’s Comet is out with publishers at the moment, awaiting their verdict.  This is intended as the first in a new space opera-ish series called The Dark Angels.  So, all being well, more of that.  I have several short stories sold and awaiting publication in various venues: PS Publishing’s PostScripts, The BFS Journal, and anthologies from Solaris and Alchemy Press among them.   On the editing side, I’m currently working on a third volume of the Solaris Rising series for Solaris, and all manner of things via my own NewCon Press.  So… Watch this space!

Ian on the Net