Sixth up is Mark West. 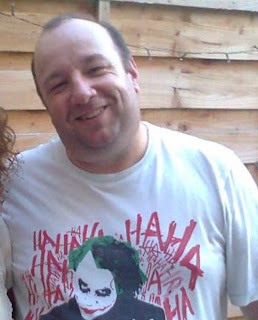 I loved reading, mainly and writing seemed a natural extension of that, to create more stories based in the worlds that I loved - such as Star Wars and The Six Million Dollar Man.  Back then, when I’d have been about eight or so, my audience was limited (mainly school friends) and biased (since they appeared in most of the tales) but the thrill at being able to entertain them stuck with me.

I had a pact with myself, that I would be published by the time I was 30.  During my twenties I wrote four novels (a crime thriller and three contemporary dramas) and submitted two but was never successful.  Then in 1998 I discovered the small press (this was before the Internet was in wide use), started writing short stories again and got my first acceptance a couple of weeks after my thirtieth birthday - a post-apocalyptic horror called As Quiet As It Gets which went to Sci-Fright.  That really started the ball rolling, with the thrill of success pushing me on to write and submit more.

It provides me with a spur.  When I first started submitting, back in the late 90s, I joined a local writing group and met a lady there, a Chick Lit writer called Sue Moorcroft, who I am pleased to say I’m still friends and critiquing partners with.  The leader of the group was a literary poet and she looked down on the “genre” writings of me and Sue but it was good fun all the same.  I had to stop going, through study commitments for my professional exams and as the years went by I really started to miss the camaraderie and the support.  I saw mention of the NSFWG, auditioned with a piece from The Mill and was, thankfully, accepted.  Since then, I think I’ve gone from strength to strength - I’ve sold stories, my critiquing skills have increased and improved and I’ve appeared in markets that I know for a fact wouldn’t have happened if not for my NSFWG membership.  It’s a great group of people, who’re friendly and helpful but always willing to criticise where necessary and as Nigel said in his interview, I think I get more out of it than I put in.

My last written was Rhytiphobia, about a man with a fear of wrinkles, for an anthology I was invited to contribute to.  My last piece to the group was The Witch House, which is a revamp of a story I had published in Urban Occult and am adapting as the first chapter of a new novel.

My short novel Conjure has just been re-published in print and digital editions by Greyhart Press, ill at ease 2 is a co-operative anthology that has just been published, which features my story The Bureau Of Lost Children (which the NSFWG critiqued) and I have two novellas coming from Pendragon Press - Drive and The Lost Film (the latter of which, in parts, has been critiqued by the group).

You can find out more information about me, my projects and various things that interest me at my blog - www.markwest.org.uk
Posted by Mark West at 09:00