Fifth up is Paul Melhuish. 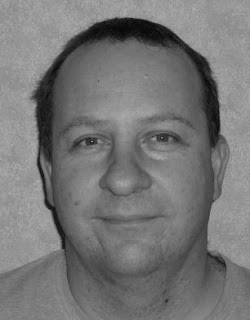 Writing is something I love doing. I’m happiest when I’m writing and have a great feeling of satisfaction once I’ve finished something and turned the computer off. So imagine doing it for a living. I’m sure it’s not all as cut and dried as this. Colleagues in the group who are full time writers have told me of hassles they’ve had with deadlines or re-writes. Sorry, this isn’t answering the question. What made me want to become a writer? When I was younger I used to read the Herberts (James and Frank) and try to write like them. Teachers at school encouraged me and even ‘Published’ one of my stories in a homemade paperback format with some other kids doing the illustrations. It was called ‘Axe Murders in the Mortuary’. That’s probably the push that made we want to become a writer.

Apart from a few short stories which were published online or in magazines, I count my first success as the novel which came out in 2011 published by Greyhart Press.  ‘Terminus’ is a gothic science fiction space opera. The story revolves around the protagonist, a hard-drinking space grunt who ends up confronting all sorts of nasty monsters on a dark planet called Thanatos One. He barely survives this only to end up on a planet of religious pacifists who have opted to live a semi-rural existence on the nice planet of Agathos. Talk about out of the frying pan… However, the evil Thanaton’s are still after him so trouble ensues.
I wrote Terminus after I’d returned from doing voluntary work in India and created Terminus’s home world of Skyfire after working in a street school in the slums of Kolkata (formerly Calcutta). I’m sure the descriptions of Skyfire would have been different if I’d spent two weeks at Butlins or somewhere.

The group takes your work and tells you how to improve it. Any criticism is for your own good and should be seen as advice rather than a poke. I find that if there is a consensus in the group about something not working in a story then they are right. If they think that a story works then that confirms to me as a writer that I’ve done my job properly and communicated the concepts and ideas behind a story correctly.

I spent last winter writing a horror novel called ‘Highcross’ about a village commandeered during World War Two for training and then left untouched for seventy years.  A firm of property developers buy the village from the Ministry of Defence and work on the village to make it habitable again. When people begin to move into the village weird things start happening.

‘I’ve got a story coming out in an anthology from Horrified press called ‘Twelve’, an homage to Doctor Who.  I’m hoping to e-publish some of my work starting with a short story called ‘The Acid Lounge’ then this will be followed by a novel, ‘Bad Acid’, which links into the story first story.

Paul can be found online at his blog here
Posted by Mark West at 09:00