The Book That Made Me - Steve Longworth

In the fourth part of an ongoing series, NSFWG member Steve Longworth discusses "the book that made me" 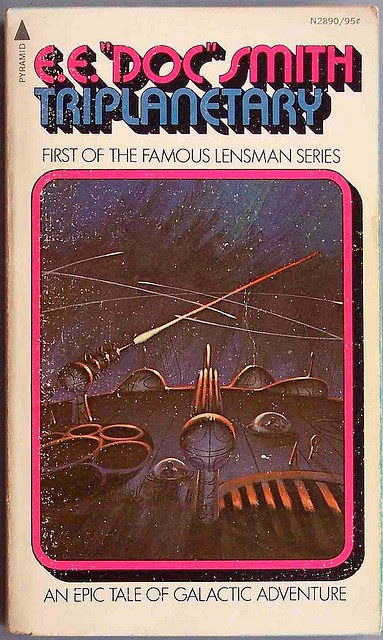 I feel embarrassed to admit this, but I now find 'The Book That Made Me' to be almost unreadable.

I must have been about twelve or thirteen. My reading habits were undergoing a rapid evolution. I was moving on from being an avid devourer of DC and Marvel comics. I consumed Agatha Christie 'whodunnits' with gusto, reading as many as I could get my hands on, and sometimes even correctly guessing the murderer (by the way, if you have never read her 1926 masterpiece 'The Murder Of Roger Ackroyd' then treat yourself - a survey of 600 members of The Crime Writers Association concluded it was the finest example of the genre ever written).

In my enthusiasm I pressed Christie's work on my good friend Mike (who is now a Texas oilman, an interesting story in itself about a miner's son from Salford).  He returned the favour by giving me a book to read, and changed my reading habits forever.

The book was 'Triplanetary' by EE 'Doc' Smith. It blew me away.

The story was first serialised in 'Amazing Stories' from 1934 and then reworked into the 'prequel' of Smith's 'Lensman' series of novels and published in book form in 1948.

The novel opens before our planet is even formed as an ancient race, the benign Arisians, observe the collision of two galaxies (one of them being our Milky Way) a process that gives rise to multitudinous planets in both galaxies. The story ends (and the entire Lensman series ends) hundreds (or possibly thousands) of years into our future.

During the galactic interpassage the malevolent Eddorians burst from a parallel universe into our reality. Thus begins an eons long struggle for control of both galaxies, with every major event in human history being part of a proxy struggle between both ancient civilisations.

The epic sweep of the story totally boggled my mind. I didn't know you could do that. This was 1971. I had previously thought that the misty abandoned quarry where they seemed to film most 'Dr Who' exteriors was the limit of the imagination. Then, in 1969,  along came 'Star Trek' and we had our horizons expanded. But this was nothing compared to the limits (or absence of limits) to Smith's imagination. Faster than light travel, immortality, telepathy, mind-melding, avatars ('working projections') and space superweapons are just for starters. We also have the ultimate 'goodies' versus 'baddies' adventure story, romance, thrills and non-stop high tempo action.

I picked up the book a few years ago and... well, I had to put it down again. The style is very stilted. 'Pulp' seems the best word to describe it. The earlier part of the book, describing events in World Wars One and Two, are long, stodgy and mostly irrelevant and should have been vigorously edited. The characters are two dimensional. There are plot holes aplenty (the Arisians and Eddorians have to keep their existence secret from the human and other races whose destinies they are shaping, and I don't buy the reason why), and the morality in the story is simplistically 'White Hat' and 'Black Hat'.

And (whisper it softly) I am 45 years older than when I first picked up the book and (I hope) my critical faculties and tastes have evolved (though I'm not sure they have matured).

Having said all that, I was interested to hear Peter Hamilton at Eastercon a few years ago say that  Smith's novels had been his introduction to SF . 'Doc' has been acknowledged as an influence by figures such as Robert Heinlein and George Lucas. Many of the tropes in the 'Golden Age' of pulp SF were invented or developed by Smith, and I think his legacy is secure.

'Triplanetary' is the book that hooked me. I then went on to devour Smith's other novels (including the equally epic 'Skylark series with its planet-sized spaceships and matter transmitters capable of moving worlds across the galaxy) and the works of Issac Asimov, Harry Harrison, James Blish and of course Arthur C. Clarke. 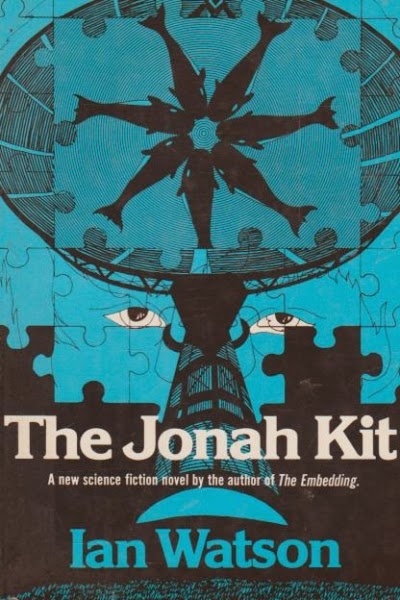 The book that reeled me in and made me a lifelong SF reader was published in 1975 and I read it when I was 17. If 'Triplanetary' blew me away then 'The Jonah Kit' by Ian Watson blew my mind; which is exactly what I think Ian set out to do.

(You can read more of Steve's thoughts on NSFWG Chairman Ian Watson's novel "The Jonah Kit" at his interview post which is on this link).

Email ThisBlogThis!Share to TwitterShare to FacebookShare to Pinterest
Labels: article, ian watson, NSFWG, steve longworth, the book that made me