The Book That Made Me - Ian Watson

In the second part of an ongoing series, NSFWG Chairman Ian Watson discusses "the book that made me" 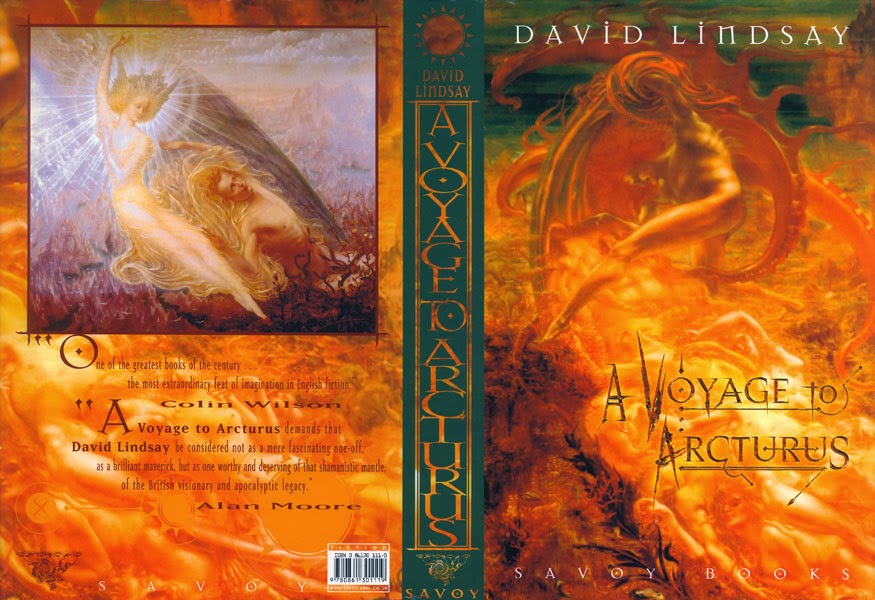 On a Sunday afternoon in 1956, aged 13, I was riveted for about 3 hours by a dramatisation of David Lindsay's 1920 novel A Voyage to Arcturus on the BBC Third Programme (the intellectual station) accompanied by very suitable eerie musique concrète.  Probably I tuned in because the name of a *star* in the title suggested that this might be science fiction, although I also remember listening to a dramatisation of Vladimir Dudintsev's Not By Bread Alone, interrupted when my father walked in just as some interrogator was uttering the words "sexual intercourse"—"Turn that off; I won't have you listen to that kind of thing!"—the only even vaguely erotic moment in this tale of heavy engineering and Soviet bureaucrats.

Initially I assumed that Arcturus must be a play, but fairly soon I found a Gollancz edition of the novel, printed on wartime economy paper, in North Shields public library.   After an Edwardian-mode séance, rudely interrupted, the symbolically named trio of Maskull, Krag, and Nightspore travel to an abandoned Scottish observatory, from which they depart in a crystal ship for the planet Tormance (torment + romance, or maybe tor + manse, or maybe...) circling Arcturus, propelled by bottled back-rays, namely the light from Arcturus which yearns to return to its star, much faster than it came to the Earth; not a bad notion, really. 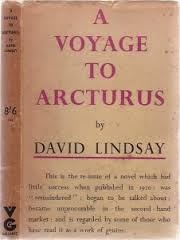 Arcturus is a Pilgrim's Progress written in the harsh and lurid language of Prophecy rather than mere Fantasy.  Awaking alone on Tormance, Maskull travels through zones representing different philosophies of life—such as Nietzschean will to power, or duty, or lust, or sweet loving passivity—
generally wreaking murder and mayhem unintentionally or intentionally, for in each zone he sprouts new sense organs which make each philosophy seem to be absolutely true and binding, even though this is illusory.

Welcome to the Wombflash Forest, and to Matterplay where evolution runs riot, and to other startling locations, and to such characters as Earthrid who plays deadly music upon the surface of a lake called Irontick.

Arcturus had a big influence on C.S. Lewis's space trilogy.  Tolkien also much admired Lindsay's novel.  Colin Wilson went even further in enthusiasm, declaring Arcturus to be the greatest novel of the 20th century.  Arcturus is the book which I have read the most times.  I even started writing a fully worked-out sequel to it, but Gollancz (owners of the copyright at the time) rejected my proposal and my two sample chapters on the grounds that Arcturus is primarily an exotic technicolour adventure like something by Jack Vance (whom I also admire).  This is indeed true superficially, but ignores Lindsay's metaphysical intentions fully and mesmerisingly carried out; which is why he wrote this masterpiece.

for further reading of Ian's recollections on this book, go to his site from this link.
Posted by Mark West at 09:00

Email ThisBlogThis!Share to TwitterShare to FacebookShare to Pinterest
Labels: article, ian watson, NSFWG, the book that made me