You know they’re watching, don’t you?

Invent-10n is my latest book (I call it a semi-graphic novella, that’s a novel of 60,000 words augmented with illustrations) which is to be published by Alchemy Press in December. It’s a dystopian story, following the travails of my heroine – twenty-year old jive-talking, nuBop singer and angry young lady, Jenni-Fur – as she struggles against the suffocating strictures of the surveillance society that is Britain 2030. 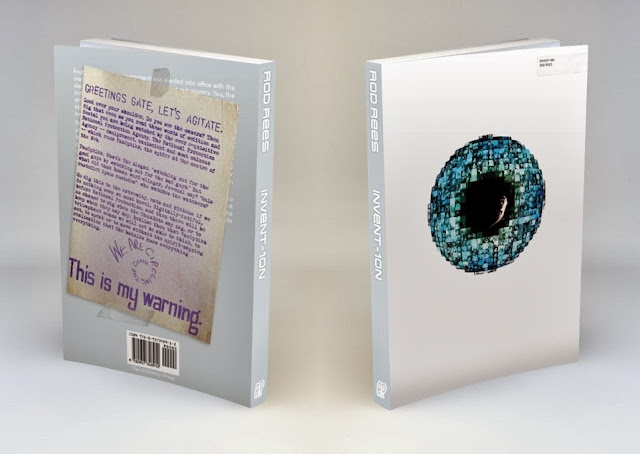 Invent-10n began life a long time ago – in 2009 to be exact – when I was playing around with the idea of writing a story about a world where the full implications of living in a pan-surveillance society were being played out.

My research told me that, by some margin, the British are the most watched people on the planet with one CCTV camera for every fourteen of us (a conservative estimate by the way). The reality is that no matter where we are, we’re being watched. What this also signals is how obsessed the British authorities (be they the police, security services or local councils) are with CCTV surveillance: they have become the most avaricious voyeurs in history. Worse, the brouhaha following Edward Snowden’s disclosures regarding GCHQ’s Tempora system – the hacking into the transatlantic fibre-optic cables by the British security services – indicates that the British authorities don’t just like to watch, they like to listen too!

The chilling thing is that Tempora is one and only one of the programs our spooks are developing to better access, store and analyse our e-communications: they can tap into the calls you make on your cell-phone, read what you say in the e-mails you send and monitor the opinions you post on social media sites.
The Britain of 2030 described in Invent-10n is one where this information-gathering addiction has reached its zenith (or its nadir, depending on your point-of-view) and my fictional National Protection Agency – the MI5 of 2030 Britain – is using its PanOptika surveillance system to hoover up all personal data relating to everybody in Britain.

Fiction did I say?

Infinitely large data storage capabilities coupled with the use of unfeasibly powerful algorithms means that soon (as in now!) our security services will have a real time 360⁰ portrait of each and every one of us. They will know what you did, when you did it, who you did it with and what you said while you were doing it … everything … 24/7. All of these data will be poured over looking for patterns that might suggest you’re thinking of doing something of which the government doesn’t approve.

Which brings me back to the heroine of Invent-10n, Jenni-Fur. She is a girl mindful of Scott McNealy’s famous maxim, ‘Privacy is dead, get over it’. Jenni-Fur comes to understand that curbing the inclination of the National Protection Agency to dig and delve into her life is futile: knowledge is power and politicians (the putative masters of the security services) are in the business of acquiring and wielding power. As Jenni-Fur sees it the surveillance genie will NEVER be put back in its lamp.

What Jenni-Fur also realises is that the availability of so much surveillance-gathered information puts democracy at risk. This is what she calls the ‘J. Edgar Hoover Syndrome’, where the power derived from having access to so much (often very sensitive) information has a corrupting effect on those controlling it. In a world supervised by PanOptika it is oh-so-easy to follow the declension:

Jenni-Fur’s insight – her Ker-Ching Moment – comes when she understands that it isn’t the computers and cameras that threaten our freedoms but the use made of this surveillance-harvested information by the Government. Therefore she must scheme to take the human element out of the surveillance matrix, to use the computer to protect us from ourselves. To do this she teams up with mysterious übergeek, Ivan Nitko, inventor of the eponymous Invent-10n.

Jenni-Fur’s world is one where paranoia is an everyday state of mind and to communicate this I wanted to create a feeling in the mind of the reader that they were actually in that world so I came up with the idea of combining faux-factual material supposedly published in the e-media of 2030 and interlacing this with extracts from the diaries of the two chief protagonists, Jenni-Fur and National Protection Agency apparatchik, Sebastian Davenport.

Given that there would be significant design element in the book I collaborated with a friend of mine, Nigel Robinson, who did the artwork for my Demi-Monde series.

That was when I got distracted writing the four Demi-Monde books and Invent-10n lay on a dongle gathering dust. Then in March this year a friend of mine – Peter Coleborn – who I knew from the Renegade Writers’ group in Stoke sent me an e-mail asking if I had anything, novella-sized, I might consider publishing through his imprint, Alchemy Press. I remembered Invent-10n and sent a mock-up to Peter. Peter liked it (what a sensible lad!).

Now I was faced with finishing the bloody thing … and up-dating it. In this day and age four years is a technological eternity and reality had already caught up with some of the ideas I’d dreamed up back in 2009. The most alarming was that in the original Invent-10n my characters used a thing called a Polly (a Poly-Functional Digital Device) to e-interact with each other and Nigel had designed a Polly (in 2009) to look like this: 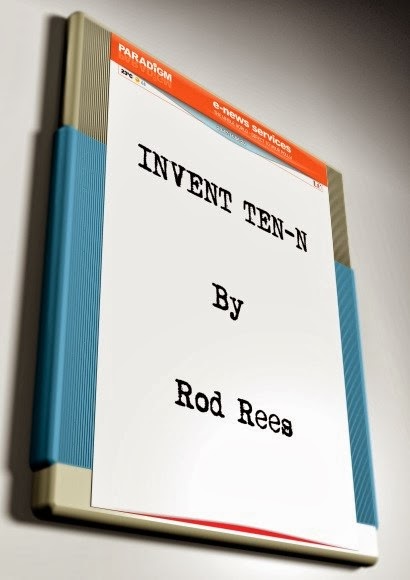 Seem familiar? One year later Apple came up with their iPad! Bollocks!

For this and other reasons I had to rework/remodel Invent-10n which took longer than I supposed – two months in fact – and then I had to hand it over to Nigel to work his design magic. The interesting thing was while Nigel beavered away the world became increasingly aware/interested in surveillance and its implications for society. The Edward Snowden revelations and the realisation (pause for gasps of surprise) the GCHQ was actually e-monitoring everybody and his brother via its Tempora system made me more determined to finish Invent-10n while the subject was hot. When I had written it in 2009 I had been writing a fantasy, now it was more a piece of social commentary.

So, what with the design requirements of the book and Peter’s various editing suggestions Invent-10n wasn’t finally finished until early September. Then I had to write the blurb which would go on the back of the book and wanting something suitably Jenni-Fur-esque I came up with this (presented à la Jenni-fur on a typewriter, which she uses to avoid the e-wigging of the National Protection Agency):

Greetings Gate, let’s Agitate.
Look over your shoulder. Do you see the camera? Then dig that even as you read these words of sedition and denial you are being watched by the ever e-quisitive National Protection Agency. The National Protection Agency – omnipresent, omniscient and most ominous – which runs PanOptika, the spider at the centre of the Web.
PanOptika. What’s the slogan: watching out for the good guys
by watching out for the bad guys. But what did that Roman word-slinger, Juvenal say? Quis custodiet ipsos custodes: who watches
the watchers?
So dig this to the extremity, cats and kittens: if we do nothing soon we must kneel, digitally-dutiful, before National Protection, and then there will be no chance to zig when the ChumBots say zag, or to beep when they say bop. Realise thou that PanOptika triumphant means we will not be able to think, to act, to speak or to move without the spirit-sapping realisation that the badniks know everything … everything.
We are circling the drain.
This is my warning.

I hope you enjoy the book!