The Omega Man and Me, by Paul Melhuish

One January, in a shell garage located by the A45 dual carriageway in Northamptonshire, I stopped to get some petrol, like you do. As I waited in the queue to pay at the counter I saw that they were selling a few DVD’s. Among the popular titles like Die Hard and Toy Story sat the 1971 version of The Omega Man starring Charlton Heston retailing at a whacking £3.99.

Sometimes you watch a film with low expectations, hoping for something cheesy, laughable yet lovable. Sometimes you’re in for a surprise.

I’ve not read Richard Matheson’s novel I am Legend but I’ve seen the Will Smith film adaptation. Basically, the majority of the world’s human populace gets infected with a plague that turns people into blood-crazed zombies. Will smith has to fight them off and find a cure at the same time. In our day and age the Man-fights-zombies-then-finds-other-survivors plot is well worn and has been seen a hundred times. In 1971 that particular plot-path was still fresh and new. Night of the Living Dead had only been out for a couple of years and the man-fights-zombies plotline was not embedded in our consciousness as it is today. 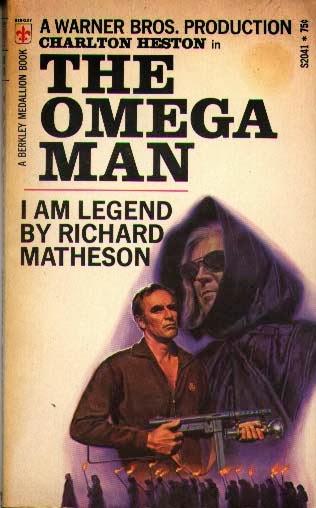 So, back to The Omega Man. In my £3.99 DVD Charlton Heston’s character Dr Robert Neville is living in a deserted city, hunting for supplied during the day but barricading himself in his home in a hotel at night, lights blaring out against the infected victims of the plague. The big difference here is that Neville’s enemies aren’t mindless zombies but thinking, conscious, religious and totally mad.

Neville’s nemesis is, if I remember correctly, The Family. A cult of survivors infected with the plague. They present as pale, albino-like and photophobic; The Family can’t stand light so only come out at night. Their leader is Matthias, a fundamentalist who abhors the technology that, he believes, created the plague. Neville, who is unaffected, is the heretic, the ‘Creature of the wheel’ who still embraces technology. (He drives a car and, more inconveniently for the photophobic Matthias and crew, leaves the lights on at night). So Matthias and his band of hooded cultists, Neville, the omega man, is the number one target.

Matthias preaches from a pulpit, wears a hood like some crazed monk and has legions of loyal followers. Which, on balance, is scarier? A mindless zombie or a fundamentalist?

The 1971 version of The Omega Man remains one of my favourite sci-fi/horror films of all time. There are no CGI effects; the stunts are real as are the locations. The city where Neville lives and survives is deserted but not decaying or weed-strewn yet. In the opening shots of deserted streets where litter is blown around and silence reigns, a chilling sense of the post-apocalyptic is evoked. Matthias and his hordes look effectively menacing and insane with their pale faces and black cloaks. They look medieval in their get up which creates a sense of the surreal by placing them in the modern urban environment.

The drama created between Neville and his nemesis could never have been achieved if Matthias had been a mere zombie and the sense of struggle between the two opposing view points just adds to the tension. In one scene one of the main protagonists, a young woman hardened by fighting for survival on the streets of the city, becomes infected with the blood-plague and joins Matthias’s family. You could almost say how this illustrates how seductive the beliefs of the fundamentalist can be to the lost and the frightened. But hey, this is just a movie. I really should stop over analysing this.

In the end, Neville finds a cure for the plague, Matthias tries to stop him from getting the cure to the non-infected survivors and Doctor Neville dies just as he gets the cure to them.

So, to the 2008 version. I don’t want to slag it off, it was an enjoyable film but no where near as enjoyable as the 1971 version. I would like to have been a fly on the wall at some of the scripting meetings for the 2008 I Am Legend. Why did they choose to leave Matthias out of it and give Will Smith a mindless nemesis? Maybe they didn’t want to invoke the image of the fundamentalist in these times where fundamentalism is a more pertinent issue? Maybe they thought they’d play it safe with the well-worn plot of man-versus-zombie. This is a shame because in Matheson’s novel the vampires’s weren’t mindless attackers, they put Robert Neville on trial at the end of the book. Whatever the reason I still prefer the 1971 version.

Having said this I’ve not seen the 1964 version of Mathesons novel, The Last Man on Earth starring Vincent Price. I might like that even better but I don’t think they’ll be selling it at any Shell garages anytime soon.


this article originally appeared on Paul's blog (at this link)
Posted by Mark West at 09:00