Moon versus Sun, by Ian Watson

This is a retrospective look at Duncan Jones´s much-lauded 2009 film Moon, with a wee bit concerning Danny Boyle´s slightly less lauded 2007 film Sunshine, written with the innocence of ignorance.  In other words I´m ignoring all the wealth of background info available to anyone who googles Wiki, and just going on my original first impressions. 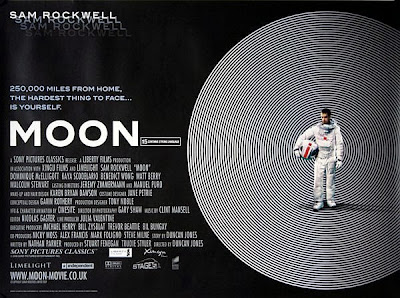 In Moon, Earth is dependent for its power resources on Helium-3 scraped off the surface of our satellite by big mining machines (vaguely plausible) and sent to Earth in space torpedos.  Supervising all of this lunar activity is precisely one chap called Sam who lives in something the size of a modest shopping mall, under the illusion that he’s on a short-term contract.  (There’s another nifty  mall in the Dr Who Waters of Mars episode: enormous empty pressurised spaces for running through in panic, that must weigh hundreds of tons, although allegedly cargo space on the Mars-bound spaceship was so limited that they couldn’t even take a bicycle with them to cover the unnecessary distances from A to B and C and D and E.)

Sam non-communicates with his loving wife back home by recorded videos – none of that one-and-a-half second delay real-time communication nonsense such as has been popular since Apollo first landed.

As a companion in his solitude Sam has a clunky mobile Cyclops-eyed Artificial Stupidity which often advises him to visit the infirmary.  (Cue Hal from 2001: I–do–not-recommend-that, Sam…) For lo, unbeknownst to Sam, he is a clone with implanted false memories à la Phil Dick (think Total Recall); and his body will fall apart before too long – whereupon another clone will be awoken from the many in storage in the off-limits basement of the mall.

Evidently nobody in their right mind would ever wish, for scientific or any other reasons, to be paid to live on the Moon in a luxurious mall (especially when the mall benefits from normal Earth gravity, unlike outside where you need to move in lunar slow motion).  No, obviously you’d supervise Earth’s vital energy supply by using up, one by one, solitary clones that fall apart.  Cloning technology and cryo-storage of umpteen spares is so economical.

When Sam has an accident outside, the Artificial Stupidity mistakenly thinks he’s defunct and awakens another Sam, which leads to poignant Solaris moments of existential bewilderment, while melancholy celestial music à la Gattica plays at great length to establish a philosophical mood.  After a bit of a stand-off, Sam and Sam start playing ping-pong, which justifies the mall already being provided with a ping-pong table which usually requires a player at each end.

A discovery!  The torpedo which would supposedly send a Sam back to Earth after his stint is actually a highly efficient incinerator; there’s just a tiny trace of ash on the floor, which the Artificial Stupidity failed to completely vacuum up.

Moon so tries to be stylish and cool, but the problem is that the story is deeply silly.  Viewing the film as an unintentional farce from the outset will enhance one’s experience quite a bit.  I recommend Moon parties with a prize for the funniest catcalls. 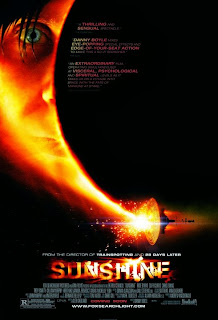 Sunshine has a slightly dodgy idea too, namely that you can rekindle a dimmed sun by chucking a lot of our world´s fissile material into our star in the form of a superbomb.  I fancy you could toss the entire Earth into the sun without making much flicker of a difference to solar output, but never mind that.  Sunshine is so stylish and hot, as well as cool, that this doesn´t matter a hoot. Without going into details, since I don´t have enough time today (rather as Fermat scribbled in a margin that was too narrow for his Last Theorem) and since I feel metaphorical rather than analytical, Sunshine pushes all my buttons of, ahem, illumination. Emotional and dramatic and visual insight, rather than dimness, especially of wits.

This originally appeared on The Ultimate Adventure Magazine website
Posted by Mark West at 09:00