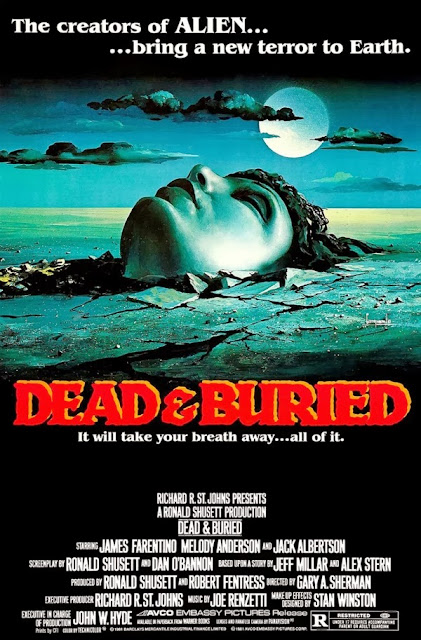 As a horror fan, I’ve loved the genre for a long time and my first contact with the film side of it was when BBC2 showed the 1930s Universal movies in the early evening.  Then, growing up in the 80s with the advent of home video and the subsequent Video Recordings Act, my friends & I had a shopping list of “banned” films with garish titles and gaudy cover art which we’d never heard of before.  The 80s were a glorious time for horror (and, occasionally, a real trough) and although I could mention Videodrome (David Cronenberg’s ideas, James Woods and Debbie Harry and Rick Baker’s fantastic make-up effects) and An American Werewolf In London (for John Landis, Jenny Agutter and, once again, the superb Rick Baker), I thought I'd instead write about a film that not many people seem to know.  And I think they should.

“Dead & Buried” was written by the then white-hot duo of Ron Shusett and Dan O’Bannon (who co-wrote Alien), the film was directed by Gary Sherman (of Deathline fame – “Mind the gap!”) and starred James Farentino (big at the time with Blue Thunder), Melody Anderson (from Flash Gordon) and Robert Englund (soon to be Freddy Kruger).  It was included in the original cull of “Video Nasties” (which, once you watch it, it clearly never should have been) and remains a very dark and often grim film and is really quite gruesome at times.

It takes place in Potter’s Buff, a seaside town in Maine and opens with a photographer taking pictures on a beach.  A blonde approaches him, models for him and then he’s brutally attacked, but doesn’t die.  The local police chief (James Farentino) who has passed up promotion to the city to stay in his home-town, is disturbed by the brutality of the crime in this close community.  When a drunk fisherman is also slain – then the photographer is finally killed – he realises that something sinister is happening.

To say more would ruin the plot, since surprise is a key element and some of the set-pieces are put together so well it’d be a shame to spoil them – though it’s safe to say that the film is never actually what you think it’s going to be.

Sherman does a great job, keeping things moving at a good pace and the whole film has a really cold tone (you only see red when it’s the blood of the victims, apart from the blonde at the beginnings shirt) that compliments the story perfectly.  The cast do a good job, the music is well used, it’s exceptionally atmospheric and it all works together to pull you in, until you’re not quite sure what it is you’re watching. 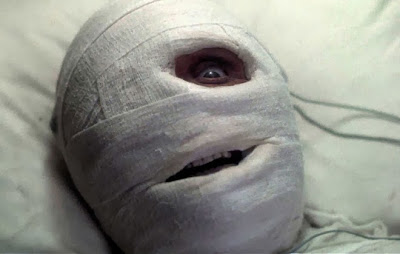 Of course, a horror film from the early 80s often stands-or-falls on the strength of its effects and here Stan Winston excels himself, using sleight of hand, photo-realistic make-ups and puppets (for one piece of ocular mayhem that made me groan when I saw it in the mid-80s and still makes me feel unwell now) and there’s a sequence set in the funeral home that is almost beautiful in its precision and care.

There are downsides, of course – the film is 30 years old and some of its ideas have since been mined by poorer productions – but these are far outweighed by the positives.

So if you’re in the mood for a creepy, intelligent, well-made horror film that isn’t afraid to show gore but doesn’t glory in it, then you could do a lot worse than watch this.  If only “they still made ‘em” like this today.
Posted by Mark West at 09:00