Sci-Fi Film To Be Put On Ice?

Steve Spellborg’s proposed sci-fi movie The Silent Ones, due to feature  hundreds of Emperor Penguins awaiting the return to Earth of superscience birdlike aliens, has enraged environmentalists.

Crowds of Emperors, the tallest of penguins, stand motionless on the ice for several months during the snowstorms of the Antarctic winter while incubating their eggs with their feet.  In Spellborg’s story they’re all standing expecting something – the return of a mother ship, which duly arrives, and on to which they all will waddle, rather as in his 1981 blockbuster Abductions of the Third Sort.  In The Silent Ones an obsessed ornithologist, haunted by dreams, will battle his way to the frozen south with his ufologist girlfriend. 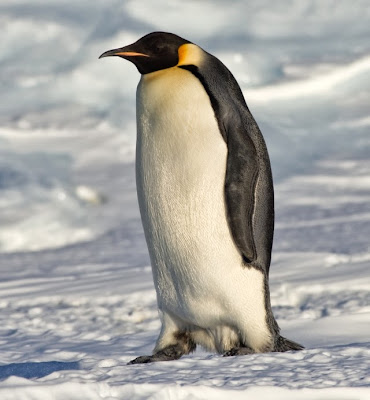 An Emperor Penguin yesterday, without his egg...

Conservationists protest that all the light and heat produced by the film crews may poach the penguins’ eggs, or make those hatch prematurely, and fear that the puzzled penguins might become psychotic.

In a press statement released yesterday at 6.30 pm Hollywood time, Spellborg declared his determination to commence location shooting by Christmas, and insisted that no penguins, nor their eggs, will be harmed physically nor psychologically during the making of The Silent Ones.  To minimise disturbance and ecological impact, the living quarters of the location film crew will be in a nuclear submarine which the US navy has now pledged to put at his disposal, and which will stay submerged as much as possible.
Posted by Mark West at 09:00