The House Next Door, a review by Mark West 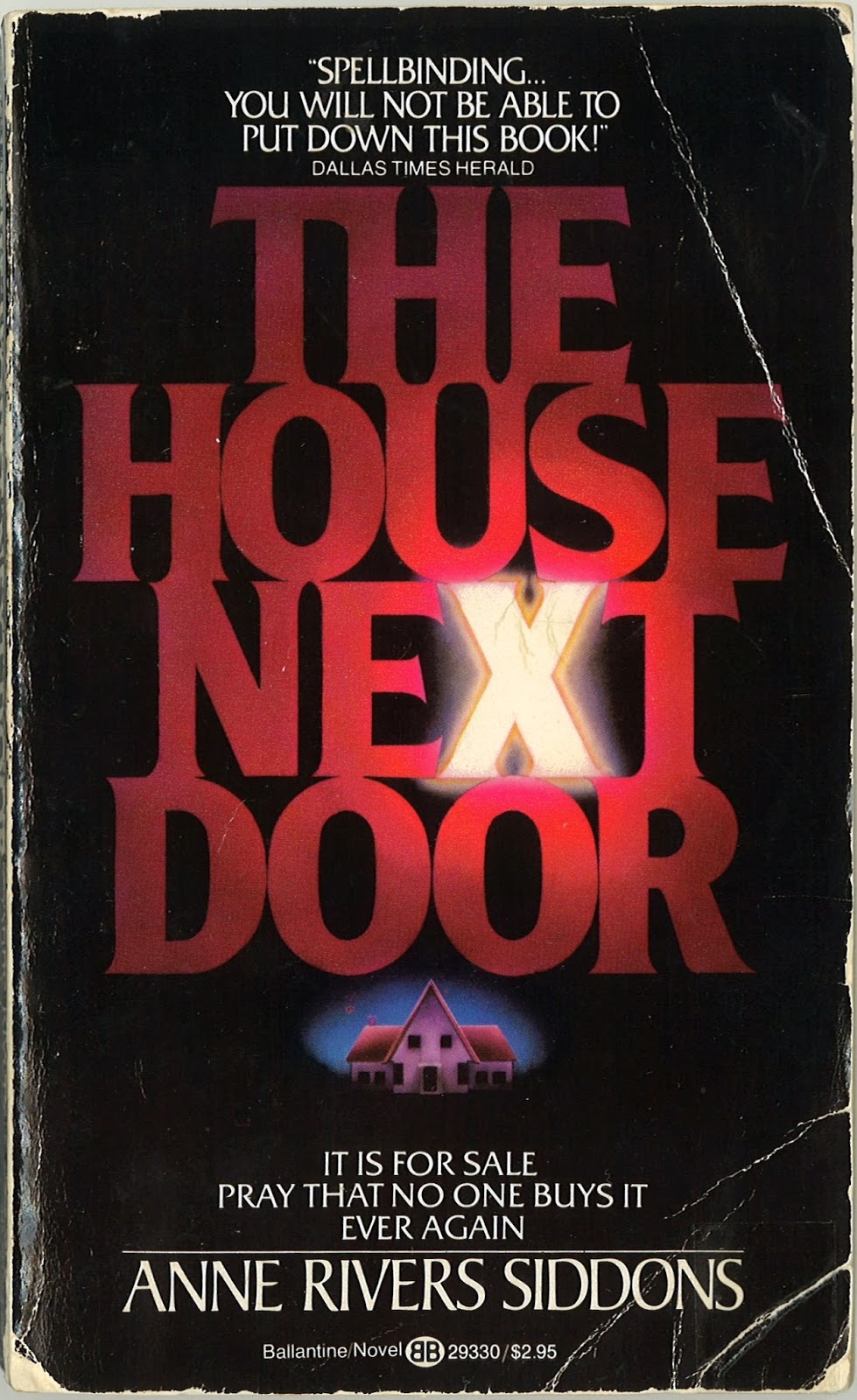 It was an architectural masterpiece - every young couple’s dream house.  Suddenly, within it and everywhere around it, families began to suffer, to go mad…to die.

And then, with mounting terror, the family next door was struck with the paralysing fear that they were next…that the pure horror of the house could not let them live…

that their salvation lay in fire and murder…and that to survive, they must enter and destroy -
The House Next Door

(from the back cover of my 1982 Ballantine Books edition)

Their love would never be the same.
Colquitt and Walter Kennedy enjoyed a life of lazy weekends, gathering with the neighbours on their quiet, manicured street and sipping drinks on their patios. But when construction of a beautiful new home begins in the empty lot next door, their easy friendship and relaxed get-togethers are marred by strange accidents and inexplicable happenings.

Though Colquitt's rational mind balks at the idea of a "haunted" house, she cannot ignore the tragedies associated with it. It is as if the house preys on its inhabitants' weaknesses and slowly destroys the goodness in them -- ultimately driving them to disgrace, madness and even death.

Anne Rivers Siddons transports you deep into the heart of a neighborhood torn apart by a mysterious force that threatens their friendship, their happiness and, for some, their very existence.

I’ve wanted to read this book for a long time - ever since, in fact, I read Stephen King’s analysis of it in “Danse Macabre” - and although it took me a long time to get hold of a copy (I finally found mine, the 1982 Ballantine edition from Canada, in a charity shop), it’s definitely been worth the wait.  Written as a contemporary novel and published in 1978, this still works perfectly with only a few hints betraying the fact that (as I write this review) it’s 36 years old.

Col narrates the novel (apart from a brief epilogue) and she and her husband Walter are normal people, as the prologue spells out.  Thirtysomething and deeply in love, they’re not rich but not poor, they have good friends, they have a nice house in a nice area (plus a summer cottage on ‘the island’) and life in Atlanta treats them well, with Walter a partner in an ad agency and Col a freelance PR person.  When Col hears that the McIntyre lot next door to them is due to be developed, she hates the idea since it means that a lot of trees and wild life will have to go, along with their privacy.  Then she meets Kim Dougherty, the architect, who is very proud of his creation and once the house is up, Col falls for its beauty.

"[The house] commanded you, somehow, yet soothed you.  It grew out of the pencilled earth like an elemental spirit that had lain, locked and yearning for the light, through endless depths of time, waiting to be released…The creek enfolded its mass and seemed to nourish its roots.  It looked - inevitable."

The first occupants - part one of the book - are Buddy and Pie Harralson, expecting their first child and from moneyed Southern families.  Buddy is a lawyer, Pie is a perky kid who has a complex about her “daddy” and it’s clear the two men don’t get on.  Very soon, small animals - birds, chipmunks, the Harralson puppy - are killed, “smeared out of life”, though after the police are called, the murders stop.  “It was as though the murderer, having made some small point to the Harralsons, had moved on.”  The Harralsons host a house-warming party and everything goes wrong - a display of homosexuality leading to a heart attack - in a way that not only destroys lives, but the trappings of it, the reputations and standing.  It also takes its toll on Dougherty - he’s very proud of his creation but it blocks his creative drive and at the party, he realises “there’s something wrong with this house.”

Part two picks up the story as Buck & Anita Sheehan move in.  She’s been ill and he seems over-protective, though as the days and weeks pass, it comes to light that they lost their only son in Vietnam (in a tragedy similar to the one in which Anita lost her father and brother).  Anita receives phone calls with no caller and she sees her sons death in a TV movie that no station was carrying.  As she retreats into depression another neighbour, the well-respected Virginia Guthrie, helps out but can’t prevent the ultimate betrayal.  Although I won’t say what that is, Col witnesses the incident and she’s unable to tell anyone else, which ties her into the dark secrets of the house.  The house affects Kim further, leading him to try it on with an uncomplaining Col and their almost-tryst is witnessed by Walter, who is driven into a rage that they only just manage to avoid.  From this point on, as our heroes become keenly aware that something is askew, the tension begins to crank up.

Part three has the Greene’s move in.  On the surface, Norman is an overbearing, ex-army college lecturer and his wife Susan is quiet, tolerant and moneyed.  Their daughter, Melissa, is 8 and during a party she has an accident that - again - causes distress but also highlights that Norman is a monster.  At this point, the house comes between Col and her close friend Claire Swanson, another neighbour who has always been supportive and this section is beautifully written and full of pain.  When the end comes for the Greene’s, that resolution - a tragedy of the mundane - is heartbreaking as it plays out.  At this point, Col and Walter decide enough is enough and finally make a stand but the reaction is one they expect - ridicule, ostracisation and pity - and we see this once lively couple driven to extremes that couldn’t have been contemplated at the start of the book.  As everything collapses around her and Col mourns her previous life, with friends and laughter and good futures to look forward to, there’s a real sense of loss.

Then we get the final, shocking twist of the knife.

This is a wonderful book, that had me enthralled from the start to the gut-punch finish.  Wonderful written (and simply told), the whole thing is perfectly constructed and the language is often beautiful (when the Swansons move out, Col observes - “About a waiting house [there is] a sort of mournful abandonment, a wistful air of ‘Why are you leaving me?  What went wrong?'").  For the most part, Col has a lovely narrative voice and the home she shares with Walter, their sanctuary, is the exact opposite of Dougherty’s modern marvel and Siddons uses it to create a warm, homely base.

The Atlanta location is well used, from the seasons (Siddons writes the heat of summer and the coolness of the evenings so you feel as if you’re sitting on the Kennedy patio) to the mixture of old and new money (and old and new values) and the dialogue has a lilt that is pleasant to read.  The characters are well-drawn and believable within the situation (even if, as with Col sometimes, they are occasionally too stuck-up about things to be sympathetic) and the book has a nice pace to it, taking its time to set things up but with a mounting sense of tension behind it all.  The three stories (each new neighbour has its own part) give it a feel of interlinked novellas, but that works too, with Col acting as the bridge between them.

However, the novels masterstroke is the house itself.  Whilst a lot of bad things happen in it, most of them - as characters point out - could be ascribed to terrible bad luck and it’s only as a sum of the whole that gives Col’s fear of it being haunted any credence.  But is it, or is it just the fact that we have an unreliable narrator who is slowly unravelling over 278 pages?  Personally - especially regarding the ending - I think it’s the house because it doesn’t only wreak havoc on its occupants but destroys the people around it, fragmenting the neighbourhood, wrecking long-standing friendships and creating terrible secrets that help to grind down daily life.  As the blurb says, “It is as if the house preys on its inhabitants' weaknesses and slowly destroys the goodness in them -- ultimately driving them to disgrace, madness and even death” and that’s perfect.

“The House Next Door” is a great read and I cannot recommend it highly enough.

This review originally appeared on Mark's blog here
Posted by Mark West at 09:00