Creature From The Black Lagoon, a review by Mark West

Following on from Ian Watson's article about "Moon" and "Sunshine" a few weeks ago, here is an article/review from NSFWG member Mark West on the classic 1954 Universal horror film. 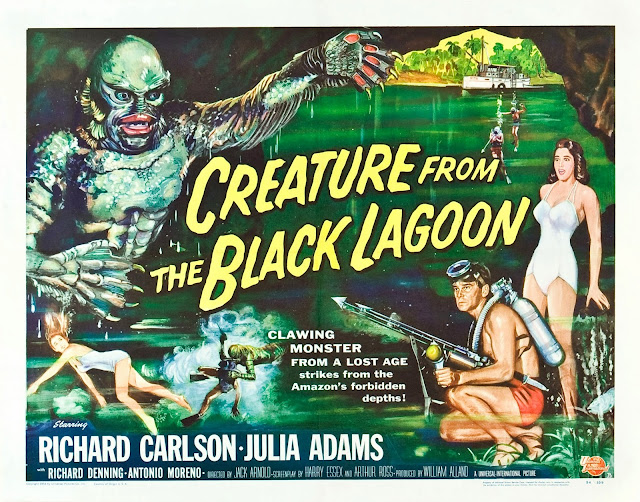 As a child of the 70s and 80s, I grew up without ready access to the films that I read about in magazines or books and so a lot of my exposure to early horror was if I was allowed to stay up late on a Saturday night to watch one. Then, during one summer – I think it would be been 1980 or 1981 – a lot of classic B&W chillers were shown on BBC2, after tea. Finally, I got to see Lon Chaney as The Phantom, rather than just reading about him and scaring myself silly over the pictures; finally I got to witness Boris Karloff’s superb performance as Frankenstein’s monster and finally, I got to see the creature that, for me, is the highpoint of Universal horror icons.

Assuming it was 1981, I was twelve when I first saw “Creature From The Black Lagoon” and I loved it. I bought the DVD, years later and watching it again is like revisiting a much-loved old friend.

Opening with a prologue that details the formation of earth (but, really, is just an excuse to have loads of things hurtling at the camera to fully utilise the 3D experience), this moves to the present day where a geology expedition in the Amazon uncovers a fossilised hand from the Devonian (I don’t know either) period. The expedition leader, Dr Carl Maia (Antonio Moreno) takes it to his friend, Dr David Reed (Richard Carlson), an ichthyologist and the formers girlfriend Kay Lawrence (Julia Adams). Their financial backer, Dr Mark Williams (Richard Denning), decides to fund an expedition so they sail up the Amazon in an old steamer called Rita, captained by Lucas (Nestor Paiva).

Arriving at Maia’s camp, they discover his workers dead (we, the viewer, get to see the attack, where the Gill-Man is threatened and so fights back) and decide to stay on to look for more fossils. Reed suggests that some rock formations could have been washed downriver and Lucas tells them of the “Black Lagoon”, a paradise from which no-one has returned, where the tributary they are on ends. They set off, unaware that the Gill-Man is watching them, as it’s spotted Kay and likes what he’s seen.

Once at the Lagoon, Reed and Williams go scuba-diving and pick up some samples and then, whilst they’re examining them, Kay goes for a swim and the Gill-Man stalks her, touching her feet with an almost gentle reverence. It then gets caught in the ships net but escapes, accidentally leaving behind a claw to reveal its existence.

After killing two of Lucas’ crew members, the Gill-Man is captured and locked in a cage on the Rita. It escapes and Reed decides that they should return to civilisation but the Gill-Man has other ideas and blocks the lagoon entrance with logs. As the crew attempt to move them, Williams is killed by the creature, who then abducts Kay to take back to his cave. Reed, Lucas and Maia follow, rescuing her and shooting the creature. He is last seen sinking slowly into the depths, presumed dead. 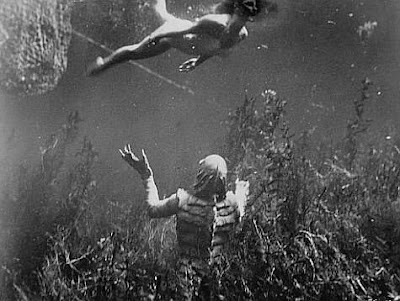 This is a terrifically entertaining film and I really enjoyed it. Ably directed by Jack Arnold (who made, amongst many others, “It Came From Outer Space”, “Revenge Of The Creature”, “Tarantula”, “The Incredible Shrinking Man” and “Monster On The Campus”, before moving into TV directing), this keeps up a good pace from the off, with only a couple of slower moments which mainly seem to do with the 3D experience. The writing, by Harry Essex and Arthur Ross, keeps the scientific mumbo-jumbo to a minimum, though I could have done without the “Devonian period” and whilst it’s a fairly standard plot, the character interplay is sharp and bouncy. The production design is terrific, with the main set being Rita in the lagoon and whilst we never see the whole area, you get the sense of the claustrophobia, which ramps up the suspense when the Gill-Man is on the prowl.

The acting is, on the whole, pretty good with Nestor Paiva making the most of his character’s cheerful brashness to hold the screen whenever he’s on, whilst Richard Denning seems to relish his characters nastiness. Julia Adams, the beauty to the Gill-Man’s beast, is more than just decoration, holding her own even when – at times – she’s reduced to simply being the person who screams to alert the others. As for the Gill-Man himself, the two stuntmen who played him – Ben Chapman on land, in a darker suit and Ricou Browning underwater, in a lighter suit – aren’t credited in the film, which is a shame.

The underwater sequences, directed by James C Haven, are beautifully photographed, with the murky depths illuminated by shafts of sunlight that look spectacular. Arnold spends a good chunk of the running time underwater, highlighting the differences in the worlds though some of the swim-pasts, though they probably looked great, feel like padding in 2D.

Of course, a monster movie lives or dies by the quality of its “star” and this doesn’t disappoint. Apparently stemming from a story the producer William Alland was told, about a mythical race of half-man/half-fish creatures in the Amazon, this introduces the Gill-Man early and doesn’t suffer for it. He even gets his own theme – some jangling horns – and the first ‘shock’ reveal of him, underwater, is still quite unnerving today. 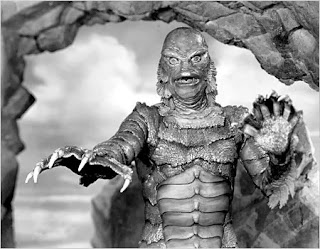 A big element of that is the fantastic suit, though it wasn’t without its disadvantages, visibility being one of them. Chapman apparently bashed Julia Adams’ head as he carried her into the cave and Browning had to hold his breath for long periods of time, so that all the air had left the suit before he could move. Designed by Millicent Patrick, though Bud Westmore took the credit, the creature’s facial features were based on a frog, hence the bulging jowls as it breathes. With scales and fins and hands like a wicket keepers gloves, the suit looks superb – on land or in water – and still holds up well when viewed now (as it should, costing $12,000 back then).

This was originally shown in 3D (the director also made “House Of Wax” the previous year, another 3D film), as was the craze at the time but I’ve never seen it in that format and some of the ‘special dimensional effects’ get a bit wearing when watched in 2D. But as a quibble, it’s very minor.

The film was successful enough that two sequels followed – “Revenge Of The Creature” (1955) and “The Creature Walks Among Us” (1956).

“Creature From The Black Lagoon” is a classic, giving the genre at least two highly iconographic images – the Gill-Man himself and the wonderful underwater swimming session with the lovely Julia Adams, sparkling in her white one-piece. What makes the character stronger is that, in the end, he’s a sympathetic creature – he’s only trying to protect himself and his environment from the deadly encroachment of men.

This is a cracking film and very highly recommended.

This review was first published at the Monster Awareness Month website in February 2011
Posted by Mark West at 09:00