To be launched in April at Illustrious: Eastercon 2011. This year’s convention is themed on military SF. Following the success of Conflicts, launched at last year’s Eastercon and NewCon Press’ single most successful title to date, it seemed churlish not to explore the theme further. The new anthology therefore takes some familiar elements from the first book and mixes in radically different ones, both in terms of contributors and approach. So we welcome back Andy Remic, Eric Brown and Gareth L Powell from Conflicts, the latter two providing stand-alone stories set in the same universe as their Conflicts stories. To these we add ten exciting new contributors, bringing you:

• A gritty view of a beleaguered army unit fighting a very alien war and mourning one of their own;
• The chilling fate of those crewing a Russian ice submarine in a dystopian world;
• A view inside the powder-keg environment of an alien prison installation;
• The experiences of a war artist in a disturbingly plausible future;
• A Welsh pub under siege in wholly unexpected fashion;
• A warrior returning home from galactic conflict only to face his greatest ever challenge;
• Ridgeway school, which must somehow survive attack by the dreaded Harvesters;
• A missionary doctor harbouring an alien fugitive against all advice and reason…

And much, much more…

Available as an A5 paperback plus:
Dust-jacketed hardback, limited to just 150 copies, each individually numbered and signed by all contributors. 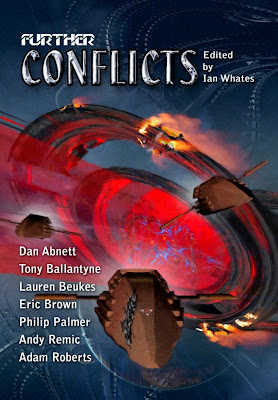